Another Headache for Darwin

The discoveries covered in this are yet another wonderful refutation of Darwinism.
Of course, we know beforehand that the Darwinians will deny these clear implications, as they always do when any discovery challenges their secular humanism (a religion) based theory.  That’s because Darwinism is materialism’s origins myth.
For example shCherbak writes,

“First, a general and the most forcible argument: it has been found that the genetic code is governed directly by the arithmetical symbol of zero. This striking fact is verified simultaneously by several independent orderlinesses – logical, arithmetical, and semantical… Incidentally, such an acting zero alone might be sufficient to assume an artificial nature of the genetic code.”

Zero is indeed and abstraction, as is the decimal point.  Only minds can entertain abstractions. Nature, being mindless, cannot therefore create or use abstract data like this. Abstractions don’t exist in nature’s matter and energy.
Indeed, the very definition of the word abstract is as follows:


1. thought of apart from concrete realities, specific objects, or actual instances: an abstract idea.
2. expressing a quality or characteristic apart from any specific object or instance, as justice, poverty,  and speed.
3. theoretical; not applied or practical: abstract science.
4. difficult to understand; abstruse: abstract speculations.
…
8. an idea or term considered apart from some material basis or object.
9. an abstract work of art.

Note: removed unrelated definitions (related to arts)
Abstractions are only and always conceptual, requiring a mind.  Thus Nature, DNA and life as a whole, cannot know or understand abstract concepts like zero and the decimal point.  Matter and energy alone cannot abstract.

The very obvious conclusion of the existence of abstraction being used in the genetic code is a proof – not a mere evidence – that the genetic code was created by a mind, and intelligence.
ShCherbak states this very clearly in his statement- that I repeat for emphasis, “Incidentally, such an acting zero alone might be sufficient to assume an artificial nature of the genetic code.“
An “artificial origin” is the same as “intelligently designed”.
There is no other source for abstraction but mind and only mind can understand it.

Is this thus the end of Darwinism?

Well the truth is that Darwinism died many years ago with the discovery of the genetic code itself.  How so? Code is a symbol system.  Codes do not write themselves. Codes are conventions of symbols contrived to represent something other than themselves.  Algorithms cannot create themselves. No random process can create algorithmic symbol systems. Algorithms, being instructions and how to do something – like make a blueberry pie or build car -  require a mind.
As Dr. David Abel explains,


“Not even Descriptive semantic information is achievable by inanimate physicodynamics (Pattee, 1972, 1995, 2001). Measuring initial conditions in any experiment and plugging those measurements appropriately into equations (e.g., physical “laws”) is formal, not physical. Cybernetic programming choices and mathematical manipulations are also formal.
The specific term PI originated out of a need to qualify the kind of information being addressed in peer-reviewed scientific literature. Shannon measured only probabilistic combinatorial uncertainty. Uncertainty is not information. It is widely recognized that even reduced uncertainty (“R,” poorly termed “mutual entropy”) fails to adequately describe and measure intuitive information. Intuitive information entails syntax, semantics and pragmatics. Syntax deals with symbol sequence, various symbol associations, and related arbitrary rules of grouping. Semantics deals with the meanings represented within any symbol system. Pragmatics addresses the formal function of messages conveyed using that symbol system.” – http://www.scitopics.com/Prescriptive_Information_PI.html

More information and several articles one should read to grasp the concepts discussed can be found here.
Again Abel notes,


“No one has ever observed PI flow in reverse direction from inanimate physicodynamics to the formal side of the ravine—the land of bona fide formal pragmatic “control.” The GS Principle states that selection for potential function must occur at the molecular-genetic level of nucleotide selection and sequencing, prior to organismic existence (Abel, 2009b, d).
Differential survival/reproduction of already-programmed living organisms (natural selection) is not sufficient to explain molecular evolution or life-origin (Abel, 2009b). Life must be organized into existence and managed by prescriptive information found in both genetic and epigenetic regulatory mechanisms. The environment possesses no ability to program linear, digital folding instructions into the primary structure of biosequences and biomessages.
The environment also provides no ability to generate Hamming block codes (e.g. triplet codons that preclude noise pollution through a 3-to-1 symbol representation of each amino acid) (Abel and Trevors, 2006a, 2007). The environment cannot decode or translate from one arbitrary language into another. The codon table is arbitrary and physicodynamically indeterminate. No physicochemical connection exists between resortable nucleotides, groups of nucleotides, and the amino acid that each triplet codon represents. Although instantiated into a material symbol system, the prescriptive information of genetic and epigenetic control is fundamentally formal, not physical.”

What he is saying, for those not used to the terms of reference and concepts of the laws and nature of information, is that Darwinism cannot be true because matter + energy, random mutations + “selection” (a mere filter) cannot create abstractions like codes and symbol systems.  It just doesn’t happen. No more than your rose bush can do arithmetic.  Math is abstract in itself, nature knows nothing out it.

Therefore this arithmetical nature of the genetic code, with its zero and decimal, its algorithmic information, cannot be natural. This is a defeater for Darwinian evolution – period.

The current generation of elder Darwinian fanatics will never accept these obvious facts, it counters their whole world view and makes them nervous and insecure.  That’s why the Darwinistas are so enraged, utterly out to lunch, LOUD and adamantly resistant.  They are the new inquisition. It’s about religion for them, not science, whether they confess this “sin” or not.

This was revealed by one of their own, who at least was honest enough to admit it. Richard Lewontin,


“We take the side of science in spite of the patent absurdity of some of its constructs, in spite of its failure to fulfill many of its extravagant promises of health and life, in spite of the tolerance of the scientific community for unsubstantiated just-so stories, because we have a prior commitment, a commitment to materialism.  It is not that the methods and institutions of science somehow compel us to accept a material explanation of the phenomenal world, but, on the contrary, that we are forced by our a priori adherence to material causes to create an apparatus of investigation and a set of concepts that produce material explanations, no matter how counterintuitive, no matter how mystifying to the uninitiated.  Moreover the materialism is absolute, for we cannot allow a Divine Foot in the door.”
‘Scientists, like others, sometimes tell deliberate lies, because they believe that small lies can serve big truths.’ – Lewontin, R.C., The Inferiority Complex, New York Review of Books, 22 October 1981, p. 13.

Well we can take his word for it, right? Well um … if you can trust a scientist that tells you that he lies!   This is nevertheless a very strange statement. He says the materialism is absolute, and we cannot allow a Divine Foot in the door. But atheism has no absolutes!

The Darwinists only logical response to this is to claim panspermia, an extra-terrestrial origin for DNA.  But that only pushes the problem back one step, for then we need to ask, “How did they get here?” Now, supposing that the ETs themselves are DNA based will only leave us with the same question of the origin of life.

It will of course take a long time before these perfectly logical conclusions are accepted – perhaps the next generation of students of biology and other related domains will accept the truth. We’ll have to wait till this generation dies off. 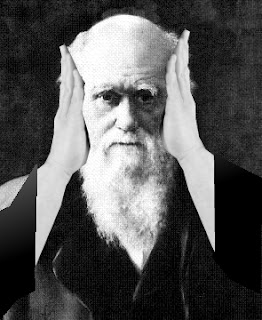 A Theory In Ruins

The Darwinian propaganda juggernaut is a lot like a T-Rex: huge, stupid, vicious and utterly intolerant of dissension.  But it's slowing down.

Its engine is broken down to the point that it can no longer provide the force necessary to keep its velocity.  The engine runs on gas (hot air) and the hot air is the only thing keeping the machine from completely falling apart.