Even More BAD Thinking by Atheists

Yes ladies & gents, this is the sum of all atheist origins myths. Even normally brilliant people like Stephen Hawking, being desperate to find any other solution to origins but a God being, i.e. a sufficient agency and power to explain the universe, are now claiming that nothing created everything.

In his latest book he claims,


“Because there is a law such as gravity, the universe can and will create itself from nothing,” he writes. “Spontaneous creation is the reason there is something rather than nothing, why the universe exists, why we exist.” – The Grand Design

First, it is very important to understand that this is not a scientific statement at all but a metaphysical belief statement. Hawking’s claim is very bad logic to say the least, but it’s far worse coming from his pen, it isn’t anywhere near the scientific ball park!

Real science says the total energy of nothing is always nothing. That’s what nothing “is”, no thing, including no energy, no “random quantum fluctuation”, no gravity.

This “quantum fluctuation” argument, I sadly saw used once again today. Yet a more meaningless phrase, if ever there was one in a context of “before the universe existed”, is very difficult to imagine. How can we have quantum anything before the universe exists? Where does the quantum something come from? What is it fluctuating exactly? What is it’s nature? No one answers this coherently because no one knows. Hawking, L. Krauss et al. are foolish atheists who, not being capable to comprehend or endure the idea of God, invent new pseudo-scientific trash to explain away reality. It’s pure scientific sounding sophism. As scientist Edgar H. Andrews put it,


“But laws of nature are nothing more than descriptions of the way nature operates. No one has ever proposed a law of nature that does not involve existing natural entities, whether they be matter, energy, space-time or mathematical systems.”

Dr Andrews is Emeritus Professor of Materials at the University of London and an international expert on the science of large molecules. He’s simply saying that you can’t have pre-existent laws of gravity and such without existing nature. And he concludes,


“attempts to explain away the origin of the universe as a spontaneous event occurring in some pre-existing ‘void’ fail the tests both of science and logic.”

This means that using some pretended and undefined “quantum fluctuation” is no better than saying, “We don’t have a clue”.


“But contrary to what Hawking claims, physical laws can never provide a complete explanation of the universe. Laws themselves do not create anything, they are merely a description of what happens under certain conditions.
What Hawking appears to have done is to confuse law with agency. His call on us to choose between God and physics is a bit like someone demanding that we choose between aeronautical engineer Sir Frank Whittle and the laws of physics to explain the jet engine. That is a confusion of category. The laws of physics can explain how the jet engine works, but someone had to build the thing, put in the fuel and start it up. The jet could not have been created without the laws of physics on their own - but the task of development and creation needed the genius of Whittle as its agent. … Hawking’s argument appears to me even more illogical when he says the existence of gravity means the creation of the universe was inevitable. But how did gravity exist in the first place? Who put it there? And what was the creative force behind its birth?”

Even Hawking’s ex-wife had something to say on this,


“Stephen has the feeling that because everything is reduced to a rational, mathematical formula, that must be the truth. He is delving into realms that really do matter to thinking people and, in a way, that can have a very disturbing effect on people — and he’s not competent.”

Hawking has indeed engaged in reductionism to the point of the absurd. What is troubling is that he, like his many atheist fans and colleagues, seemingly cannot see the glaring error of such foolish and yes anti-scientific claims.

As Lennox points out you can’t have mere laws creating things and you cannot have the laws of physics doing something without a universe in which they may exist! This is not hard. This is grade one science. Law is descriptive, in itself it does nothing. Moreover those laws themselves need explaining as to their own origins.

Atheism provides no answers for the origin of the universe and even less for the origin of life. But they’ll never admit it because atheism is for them a religion, a sacred calling to emptiness and a utterly vain universe. Strange that any intelligent person would ever choose such a feckless position.

Atheism is an idea that doesn’t matter. If true, nothing really matters, the universe is meaningless, life is an accident and all is permitted for no overarching moral law exists either.

Atheism is pure denial of reality. So why are the so-called New Atheists such adamant proselytizers of it? Easy. It’s their religion. No matter how much they deny it, it is nevertheless so. Dawkins, Harris et al. are their high priests, perpetually spewing forth vitriol and codswallop using pretzel logic – high in fiber makes great dung, but that’s it.


“Indeed, the message of atheism has always been a curiously depressing one, portraying us as selfish creatures bent on nothing more than survival and self-gratification.
Hawking also thinks that the potential existence of other lifeforms in the universe undermines the traditional religious conviction that we are living on a unique, God-created planet. But there is no proof that other lifeforms are out there, and Hawking certainly does not present any.
It always amuses me that atheists often argue for the existence of extra-terrestrial intelligence beyond earth. Yet they are only too eager to denounce the possibility that we already have a vast, intelligent being out there: God.
Hawking’s new fusillade cannot shake the foundations of a faith that is based on evidence.”

My own conclusion? Atheism sucks.

Update: An atheist, attempting to squirm his way out of reality,   responded to my comments on the "not playing tennis isn't a sport; not believing in God isn't a religion" statements above with the following nonsense:
"Apparently you don't understand analogies".

Um, right. Analogies are so hard to understand.

So, how to answer this deeply reflective "rebuttal"? Well, the obvious answer is that analogies that don't work, because they are logical fallacies, um ... don't work. Duh. That was so hard.


Once again we see why it is that only 98% of atheists give such a bad reputation to the rest -as being such shallow thinkers and ignoramuses?  Not only does atheism suck, its for suckers who "can't handle the truth". 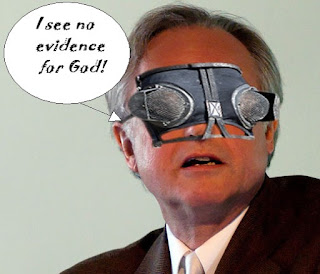 Email ThisBlogThis!Share to TwitterShare to FacebookShare to Pinterest
Labels: atheism, nothing creates everything, quantum fluctuation

Fanatical atheists infest the halls of Internet forumdom, spewing forth anti-religion, antichrist and anti-rationality in their never ceasing goal to proselytize.

Call one of these ignorant, and usually uneducated preachers what they really are and you'll get blasted by many vehement accusations of breaking some moral principle of "niceness".

Of course, according to atheist uh hum "logic", objective morality doesn't exist, seeing there is no "ultimate foundations for ethics" and morality is "an illusion fobbed off on us by our genes to get us to cooperate,” and “the way our biology enforces its ends is by making us think that there is an objective higher code to which we are all subject.”

Hey, we can thank evolutionary biologist E. O. Wilson for that bit of ill tasting codswallop.

But here's the thing: why should anyone care when atheists point fingers at theists for calling them vidiots1 , hypocrites, or whatever, when it's true?

They contradict themselves by such accusations and never see the contradiction. If you point it out to them what do they do? Well they resort to pretending your comment is a strawman! Apparently they don't know what a strawman is. They don't know that following the laws of logic, it's been shown many times by many philosophers that atheism necessarily leads to the conclusion that no objective values exist and relativism is all that remains.